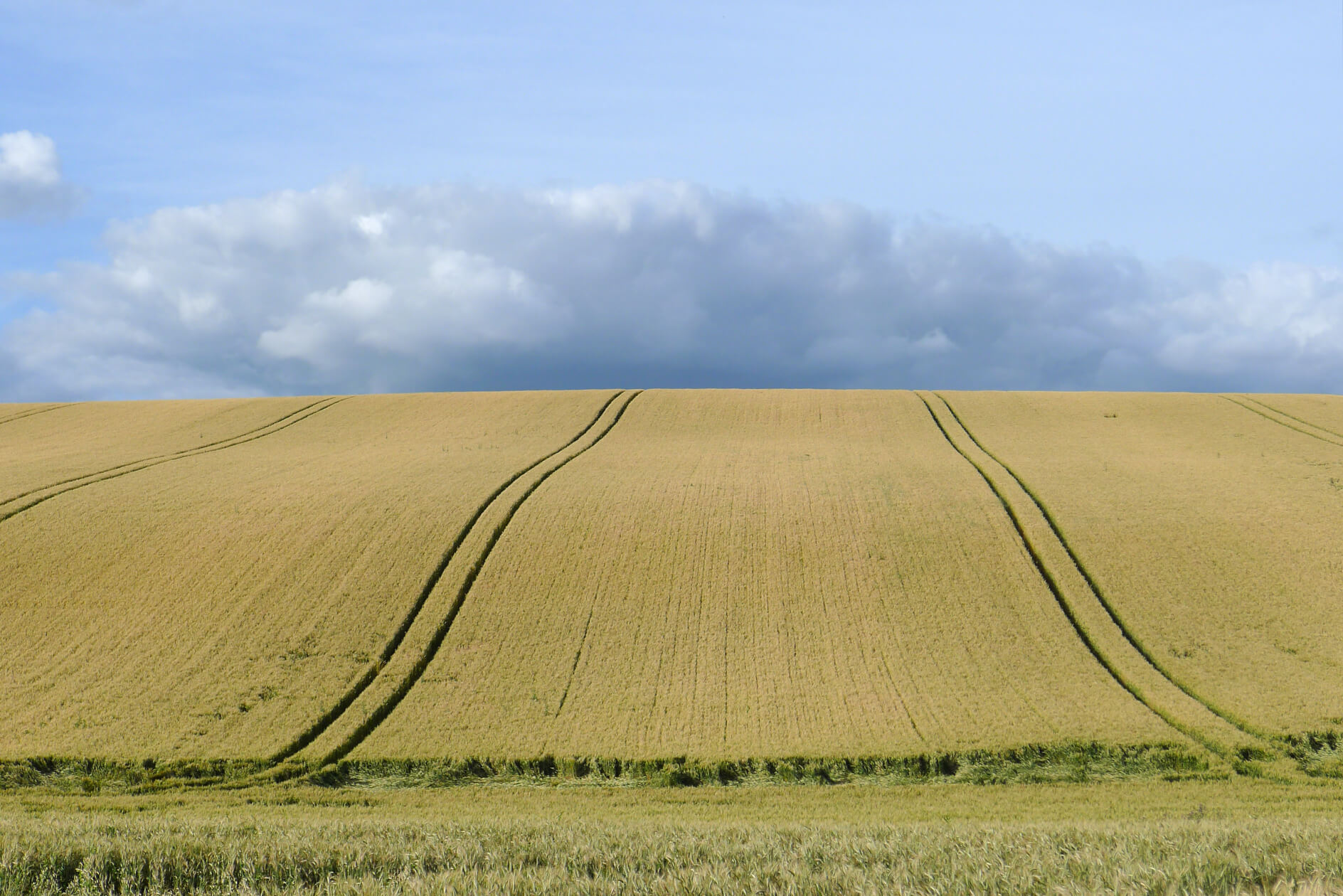 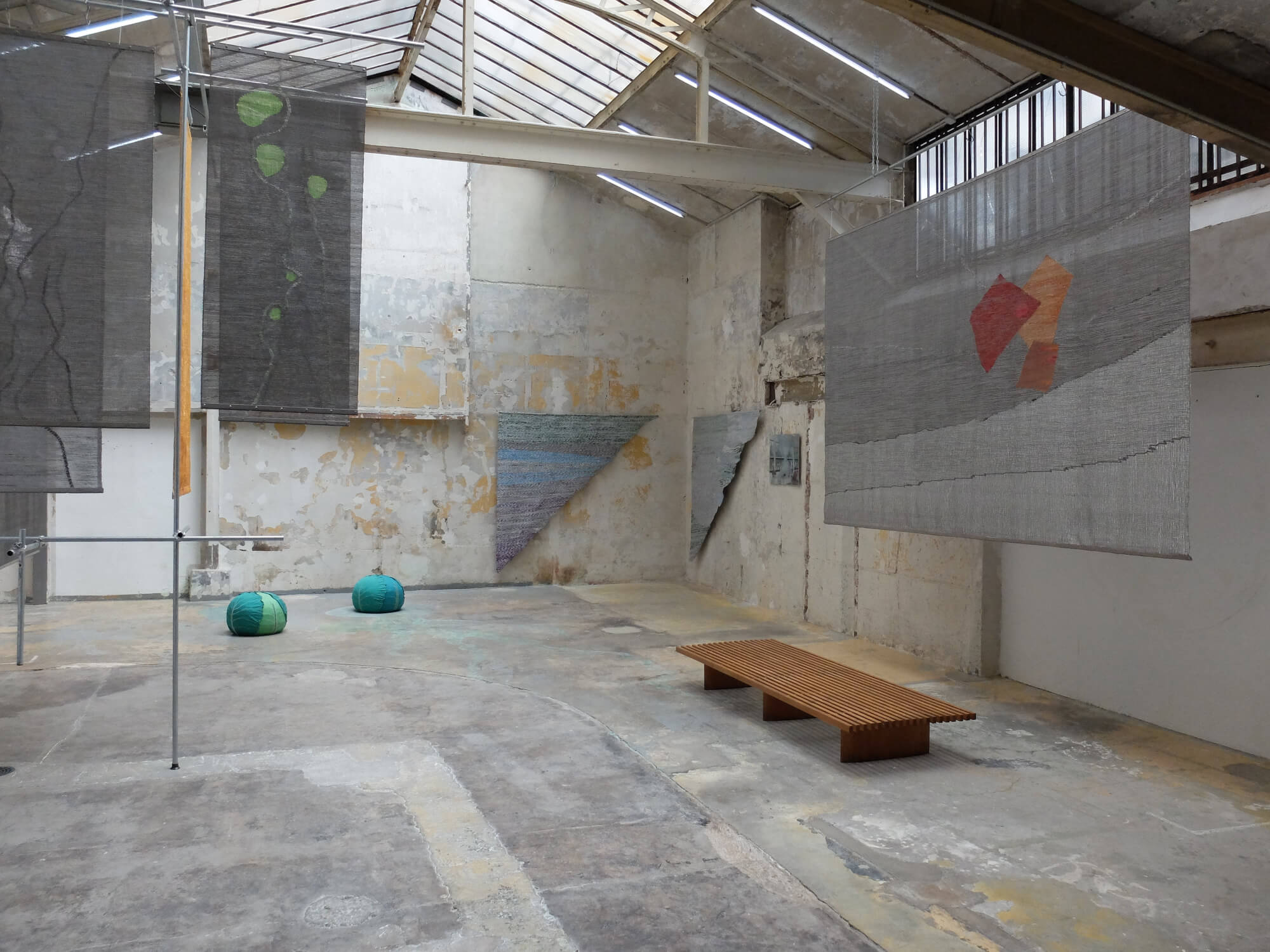 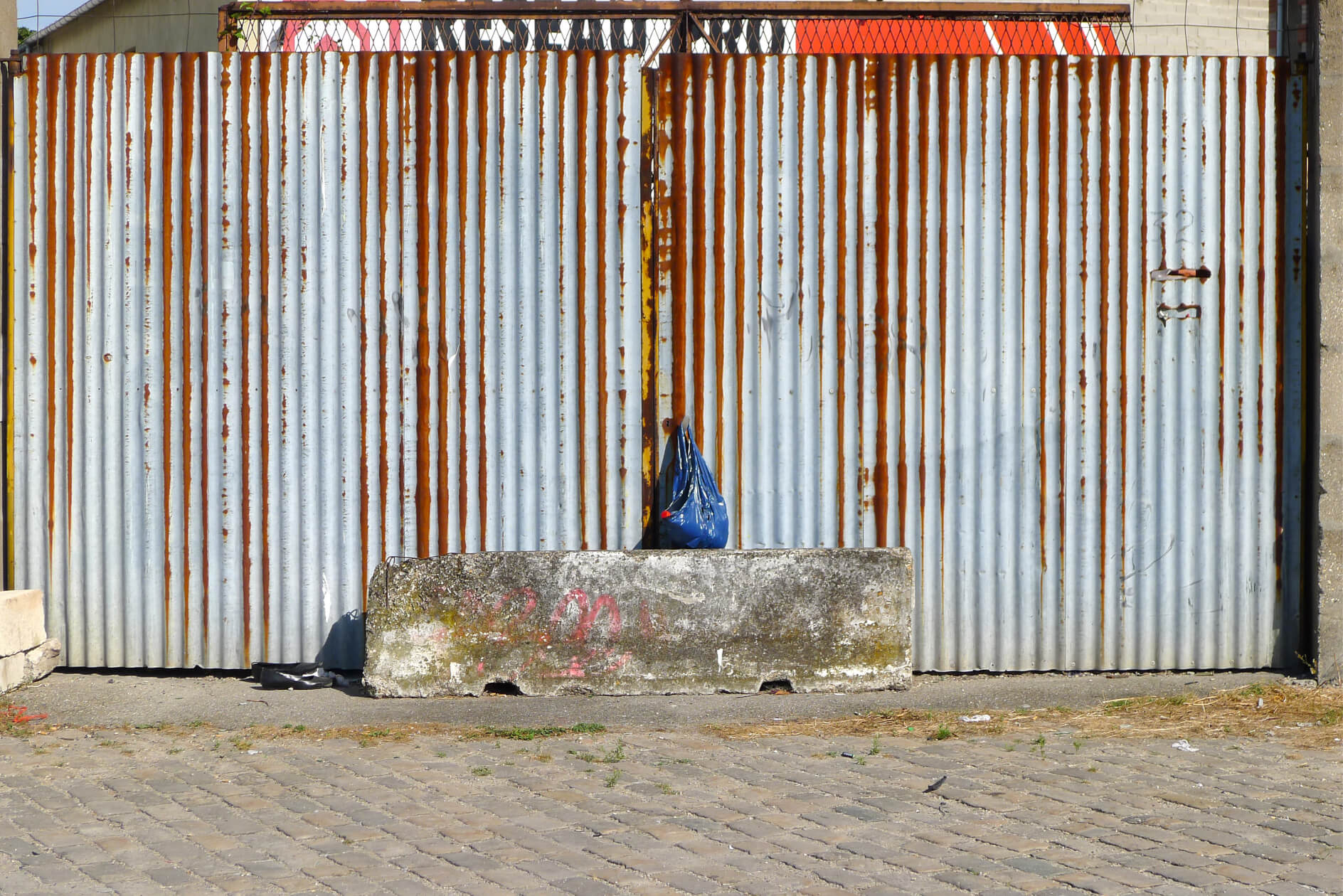 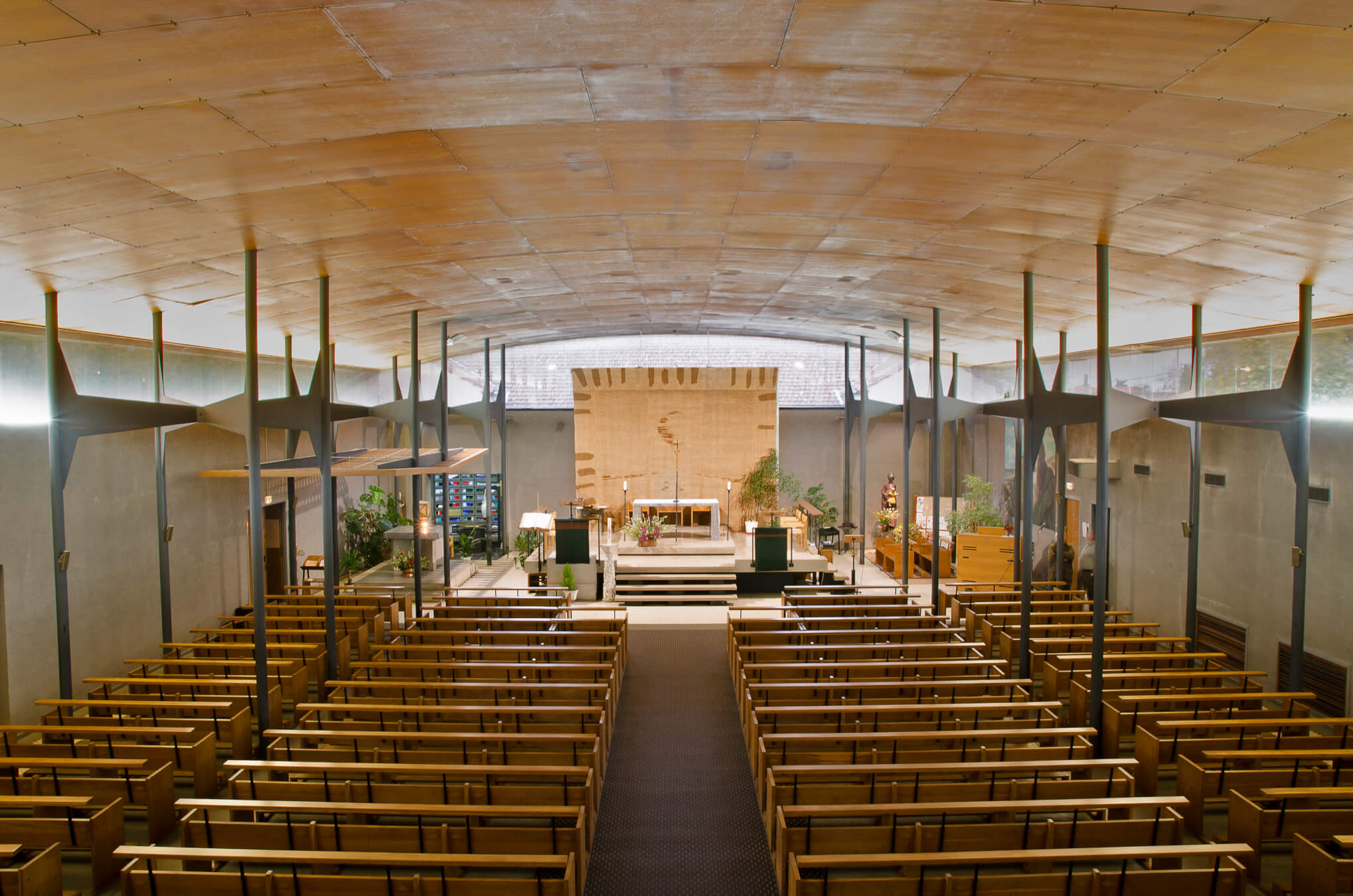 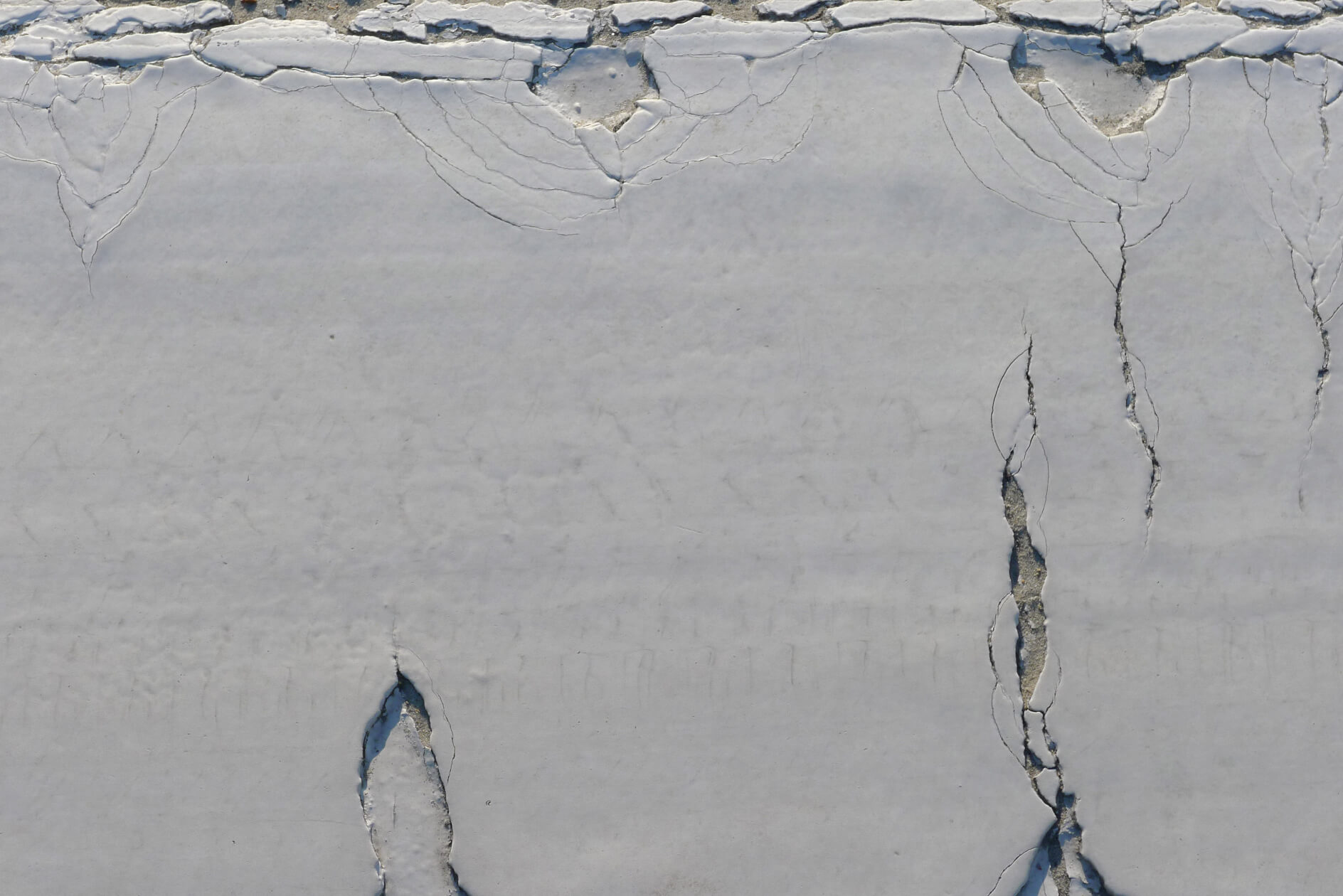 Simone Prouvé trained in weaving techniques in Paris, Sweden and Finland. From an early age, she got to meet the architects and designers who brought about the modernist revolution and worked with them on many sites.

Simone Prouvé is dyslexic without knowing it. School is dreadful for her. Good at math and at drawing, spelling mistakes in other subjects leave her behind. Her shyness isolates her, so she escapes into "seaming under the desk" and earns her pocket money knitting jacquard socks and gloves for her parents' friends.

Her mother, Madeleine, believes that weaving will appeal to her. In Paris, Micheline Pingusson, wife of the architect Georges-Henri, taught her the b.a.-ba. Other internships follow. She creates figurines out of paper string and dresses by hand these caricatures of characters glimpsed in the capital city. Every week, she meets her father, Jean, and his acquaintances in their workshops, in a bistro, and sometimes in jazz clubs or at the cabaret.

She does not speak much but understands how lucky she is to be among them: Bernard Zehrfuss, Paul Herbé, Jean Le Couteur, Steph Simon, Calder, Gisèle and Pierre Pinsard, Claude Viseux, François Stahly, Charlotte Perriand, Pierre Jeanneret, Michel Bataille ... during the exhibition of her figurines at the Dina Vierny gallery, she meets César, her first client.

Tightening the warp threads 160 centimeters wide is an issue to be solved. In 1953 she leaves France to improve and weave in Sweden and then in Finland. Trusting the weavers Alice Lund and Dora Jung, two fascinating women, she immersed herself in new techniques and their cultures, loses her shyness and meets artists and architects: the jeweler Viviana Torun, friends of Martha Villiger, Aulis Blomstedt and his wife Heidi Sibelius. Her passion for photography started in Scandinavia. After a detour through Lapland and Norway, she arrives in Antwerp where her family awaits her.

Simone resumes her training career without thinking about the technique she now masters. Without noticing it, she also forges links with her father's network of relations and with architectural trainees, which leads her to work for architecture without having studied architecture. For Charlotte Perriand's benches, she produces the first fabric meter units to the standard of the Modulor - test on a harmonic measurement on a human scale, universally applicable to architecture and mechanics - by Le Corbusier, which are exhibited in March 1956 at the opening of the Steph Simon gallery in Paris.

In 1958, after having created furnishing fabrics for stores in Nancy, Paris or Brussels, she receives a commission from Dominique Louis - an architect and friend of her brother at the Beaux-Arts in Nancy - for a large tapestry to be hung and to which she applies the techniques learned in Sweden. It was with him, equipped with an Imperator wooden enlarger, that she learned how to develop photos. A Leica camera around her neck, she then escapes to the brownfields near Nancy.
‍
In 1963 begins teamwork with her companion and future husband, the artist André Schlosser, who brings great creativity to the choice of colors and designs the cartoons that she interprets freely. In nearly twenty-five years of collaboration, they created around forty projects for architects Shadrach Woods, Maurice Silvy, Bernard Zehrfuss, Charlotte Perriand, Annie Tribel, Robert Rebutato, AUA, Reiko Hayama, Yves Moignet, Richard Dubrulle, Bernard Taillefer, Jean-Louis Lotiron, Jean Deroche… including giant tapestries. The largest, an extraordinary work of 250 square meters, is entirely handcrafted by Simone. The workload is intense, the creation of two causes frustrations and then separation.
‍
In 1990, at the age of 60, Simone embarks on the exploration of so-called non-flammable threads, including flexible threads of stainless steel and other metals, and aramids. The latter are thermostable fibers which have good mechanical properties. Enthusiastic, she returns to the search for materials, shows and explains to manufacturers what needs to be improved. New architects are discovering her creations, her unique mastery of these “non-fire” yarns: Reiko Hayama, Rainer Senn, Claude Parent, Christian de Portzamparc, Odile Decq - whom she advises for the industrial weaving of stainless steel integrated into facades from the Macro, Museum of Modern Art in Rome - or the artist Dominique Gonzalez-Foerster. Tirelessly, she weaves, exhibits, photographs.

In 2021, the Musée national d'art moderne granted her recognition for a lifetime of creation by acquiring a set of pieces that have joined its collections. For over a year, this set has been exhibited in a dedicated room in the permanent collections of the Centre Pompidou.

1990s: research on this fiber lasted two years. Stainless steel does not move, does not deteriorate and is recyclable. Stainless steel fibers alone combine exceptional technical properties that are very compatible with architectural needs: durability - no erosion, no or very little corrosion - strong resistance to acid, coefficient of expansion similar to that of glass, fire resistance, significant filtration of the sun's rays while maintaining good light transmission – these two antagonistic properties are to be combined by an adequate weaving density. These robust and solid fibers are, moreover, fully recyclable and reusable after redesign.
‍
In 1997, Claude Parent commissioned three tapestries for the Myslbeck commercial gallery in Prague. Simone echoed the large squares designed by Claude Parent for the entrance hall, breaked them up and created three square tapestries in stainless steel wire measuring 3.60 x 3.60 m, each mounted in a frame in front of a backlight.
‍
In 2004, under her technical guidance as a weaver, thousands of square metres of industrial weaving in stainless steel were produced for the Museum of Contemporary Art in Rome, the MACRO, in partnership with the architect Odile Decq.